Now that the research is well known in the academic community, MS was invited to provide an interview for the Self & Society academic journal which will be published in July 2018, and will be added to this research evidence page after publication by the Journal. Thanks to the Editor at Welfare Weekly a powerful blog was reproduced online in April which attracted comments via Facebook, and an article summarising the years of MS research was listed online in April, via ResearchGate. It attracted in excess of 2,800 online views in only three days, which is unprecedented. Whilst it is appreciated that academics and disability support groups are willing to share the research of MS, it remains a national scandal that the entire national press refuse to mention the American corporate influence with British welfare reforms; despite the fact that the influence of Unum Insurance was exposed by Professor Jonathan Rutherford in the Guardian in 2008.  This is why the British public have yet to learn about the many atrocities committed by the DWP against those least able to protest.

Witness the government reaction when the public react to their shameful policies. The ‘Windrush scandal’ has been averted entirely due to public pressure when aided by the support of the national press. Imagine what could happen if the national press, who successfully demonised chronically ill and disabled people for five years when reporting DWP propaganda, were ever to reveal the realities behind the welfare reforms? The fact that the academic research used to justify the assessment model used to resist funding disability benefit is totally discredited, dangerous and bogus.  The national press disregard the fact that there are thousands of unnecessary deaths each year, which average over eighty deaths per month, as extreme right-wing policies move towards the demolition of the UK welfare state, when aided and abetted by a notorious American corporate healthcare insurance giant with an alternative agenda.

When will the national press assert their moral responsibility to alert the British public to the ongoing planned destruction of the welfare state, the American corporate influence behind it, and the numbers who will be sacrificed, when killed by the State, to make this happen?

The Self & Society Interview

Charities are missing the point again

Killed By The State

Sick and disabled Brits killed by the state – crime without punishment

May’s Reshuffle: Chronically ill and disabled people now have much more to fear 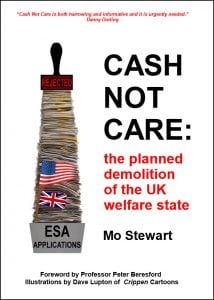